Designer Brian Patrick Flynn updated the outdoor furniture to transform his dark and dingy deck into a happy hangout for the whole family. Get the look for yourself — shop the Patio Hues in Oranges and Blues Idea Board.

When I was 8, my best friend Jerry and I played a ridiculously pointless game in his family’s backyard. We affectionately named the game Cujo after a Stephen King novel-turned-feature-film about a St. Bernard that gets bitten by a rabid bat and attacks a sweet mom and son who are stranded in a broken down car. The rabid plot plays out on a dilapidated, rural ranch besieged by crumbling deck boards and weathered barn siding.

The rules of the game were simple. We pretended Jerry’s dog Bandit was Cujo, made him chase us by stealing — and subsequently running with — his favorite toys, zigzagged across the yard and inevitably snagged a few splinters by way of busted deck planks. Then we jumped into the pool to escape him. Worst. Game. Ever. What does this have to do with Hayneedle’s decorating blog and my interior design work? Well, hold on; I’m getting to that in the next paragraph.

After buying a log construction house in the north Georgia mountains, I couldn’t help but think of how much its bottom floor deck reminded me of playing Cujo in Jerry’s backyard. Spanning the entire length of the house, the deck is accessible from the lounge area of my bunk room as well as my guest suite. And although the shiny, happy spaces just inside are bright and cheery, the deck was a dark and dreadful place where bats that bite dogs like Cujo get together to listen to Marilyn Manson and wear trench coats. Local bears, squirrels, and raccoons didn’t even bother messing with it. So, as winter finally turned to spring, I whipped the dismal deck into shape just in time to invite friends and family over to enjoy the weather and the view.

Overall, the project was remarkably quick and easy, not to mention tons of fun to complete. After my contractor David replaced a few broken boards, then extended the deck by 10 feet, I had the entire area updated with flat black paint. Hold up. Black paint for the deck and exterior of a house? Yep! Since pretty much everything I decided to add to the deck was bright blue and energetically orange, I wanted to keep the backdrop neutral. I could have done that with white, but then the palette would have been super coastal, more Californian or Floridian than rustic and rural.

I infused the space with orange by way of two identical modular sectional sofas and a few technicolor indoor-outdoor throw pillows. To counterbalance the orange’s warm undertones, I brought in navy blue with grommeted drapery panels, a traditional patterned indoor-outdoor rug, a hammock, chevron patterned ottomans, a pair of rustic metal occasional tables and throw pillows. All of these cozy deck ideas can be implemented in the colors and patterns of your choice. 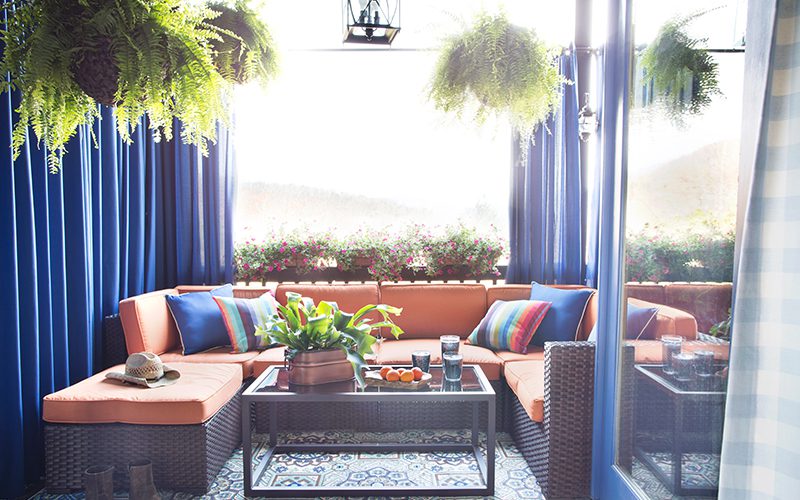 As always, lighting was key. To keep everything illuminated at night, David installed lantern sconces along the posts and added hanging lantern pendants to the ceiling.

To breathe extra life into the space, my stylist friend Jayme and I filled free-standing planters boxes and rail planters with grasses, annual flowers and arborvitae. What the heck is arborvitae, you ask? A small tree that complements rustic surroundings and makes you sound like a horticulturist, as long as you pronounce it correctly. Buena suerte with that, mis amigos!

Now that the role of Dark and Dingy Deck has been recast as Cheerful Place for Chatter, there’s no way a rabid, killer dog is hiding anywhere near it. Squirrels, raccoons and baby bears, well, that’s another story.

Shop Outdoor Furniture for Sale at Hayneedle
GET EXCLUSIVE HAYNEEDLE OFFERS
and stay up to date with trends for your home
Success! Thanks for subscribing.
Don't miss out - follow us!
Be Inspired @hayneedle