We often associate steaks with grilling, but a cast iron pan-seared steak is a year-round work of art and a favorite for mealtime gatherings. Learn pro tips on how to pan-fry a steak – and try a chicken-fried-steak recipe your friends and family will love.

“My toolkit has just about a small kitchen in it,” said Chef Stacie Simonson of Omaha Steaks, as she dredged filet mignon cutlets in seasoned flour, then fried them in bacon drippings for the most deluxe chicken fried steak recipe ever.

I had the opportunity to watch Chef Stacie work her magic at the Omaha Steaks Chef-in-Residence space – a sleek, fully outfitted loft in midtown Omaha that’s designed for events and special projects for food industry professionals. It’s the type of space where steak, if it could talk, would say it was an honor and a privilege to meet its destiny. 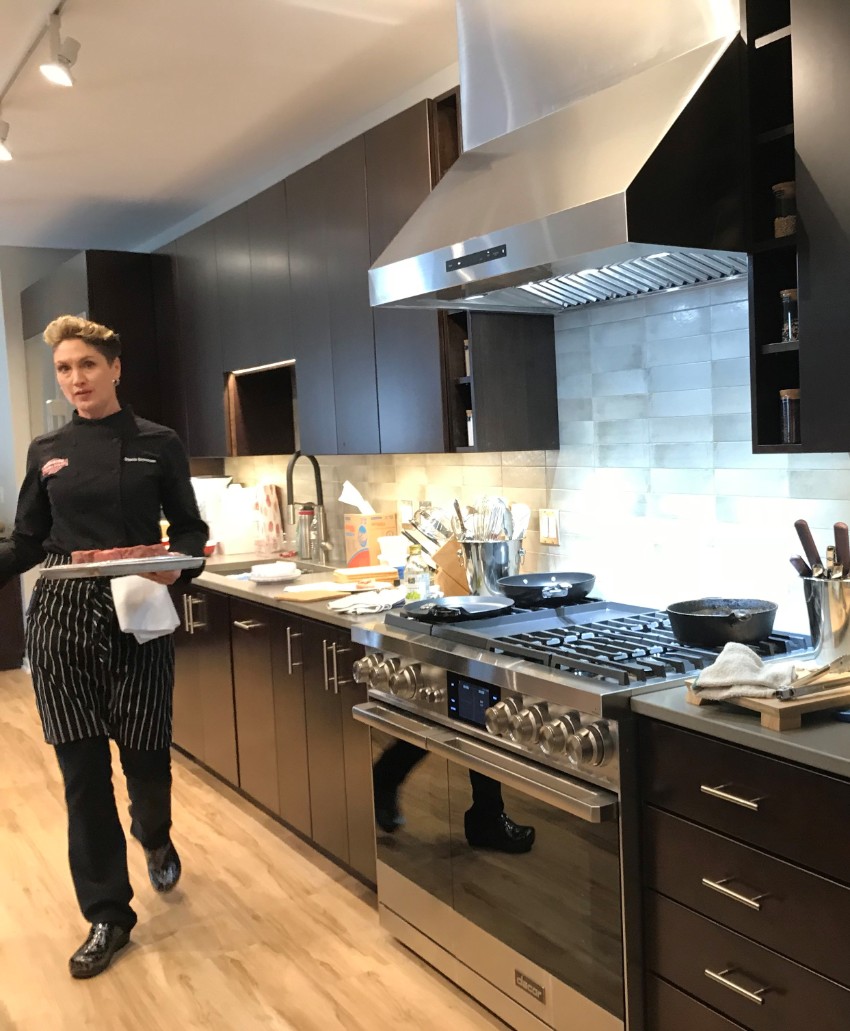 And Chef Stacie, who remembers spending her childhood allowance on cookbooks and riding her bike to the local butcher shop to watch the owner fabricate the various cuts of meat, is the perfect woman for the job.

“The most interesting thing about steak is that there are so many different cuts, and so many different ways to prepare each cut that you could honestly eat it for every meal, every season, and it will always feel like the right choice,” said Chef Stacie.

Start with a Good Cut of Meat

Chef Stacie recommends that those new to cooking steak start with ribeye, which she loves for its flavor and marbling and says is nearly impossible to mess up. A slightly less expensive, but also great alternative is sirloin.

More experienced chefs will appreciate the wow-factor of a 48-ounce T-bone, also known as a King Cut. “You want to grill that low and slow over indirect heat — or slow roast it in a roasting pan or cast iron in a 250° oven — for about an hour until the internal temperature gets to 120°, then sear it off.”

As for her personal favorite? The ribeye cap or crown, which has the flavor and marbling that she loves in a ribeye, but the tenderness of tenderloin. “It’s just a beautiful piece of meat,” she said.

As a busy mother of five, Stacie appreciates that steak is an easy crowd-pleaser. And cast-iron is one of her go-to’s in the kitchen.

“I just turn my oven on to 420° when I get home from work and put a cast iron pan in there while it heats up,” she said. “Once the oven gets good and hot, I put the steak in, and when it’s finished cooking I take it out, put a little butter in the pan and make a quick stovetop pan sauce with fresh herbs and the juices from the meat. I finish it off with a great salt (Maldon, fleur de sel, and Hawaiian salt are favorites) and dinner is ready.”

How to Break in a Cast Iron Pan

How to Maintain Cast Iron Pans

Tools of the Trade

Inspired to whip up your own beef masterpiece? Check out some of our favorite picks for outfitting a chef-worthy kitchen: