Every Thanksgiving is unique to the family who celebrates it. From annual activities to time-honored traditions, everybody enjoys the holiday in their own special way, with food and family at the center of it all. And while every family has their own unique Thanksgiving recipes, your dinner table may have more in common with your neighbors than you think. Using Google Trends data, we analyzed the frequency of Thanksgiving recipe searches by state (because we just like to do that kind of thing), and learned that where you live can have a big influence on your favorite Thanksgiving dishes. 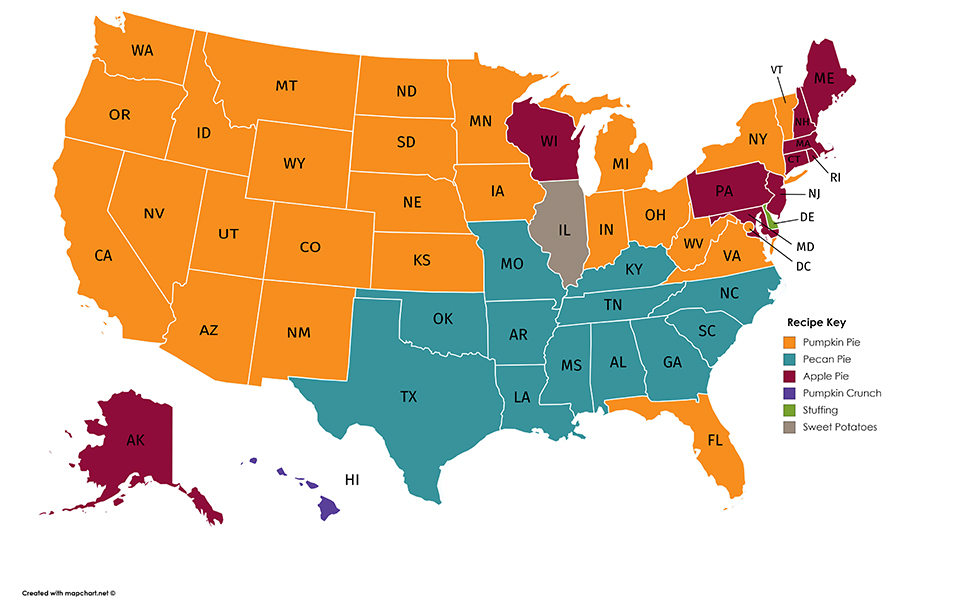 The Most Searched Recipes by State

According to Google Trends data from 2011-2015, the most-searched recipes leading up to Thanksgiving are apple, pumpkin, and pecan pie, which dominated the search bar in a whopping 47 out of 50 states. Pumpkin took the largest slice of the pie with 52% of states searching for pumpkin pie during the Thanksgiving season.

The data also indicated that these searches are geographically significant, with each of the searches largely concentrated by region: pumpkin pie is most popular across the West Coast and Midwest, apple pie reigns supreme in New England, and pecan pie sweeps the southern U.S.

Three outliers—Illinois, Delaware, and Hawaii—have managed to break the mold with searches unique to their states. While the rest of the country is looking for the perfect dessert recipe, Delaware and Illinois are searching for side dishes, with stuffing and sweet potatoes topping their respective lists. Hawaiians, on the other hand, are bucking the pie trend entirely while still sticking to the dessert category. Residents of the Aloha State search most frequently for a nutty, textured pumpkin cake known as pumpkin crunch.

It’s easy to guess why some of these recipes are so popular in their respective regions. With Southeastern states producing the majority of the United States’ pecans, it only makes sense that they’d cash in on their cash crops with a sweet Thanksgiving favorite. The same could be said of top apple-producing states like Pennsylvania, but most states just can’t stay away from the seasonal staple that is pumpkin pie. Washington, which produces more apples than any other state in the country, and Florida, situated right in the heart of pecan territory, apparently shed their hometown pride during the week of Thanksgiving and officially defect to Team Pumpkin.

Thanksgiving dinner is likely the most talked-about, planned-for, and looked-forward-to meal of the year, with savory dishes like turkey, gravy, and mashed potatoes usually taking center stage. So why have desserts beaten out these traditional staples as the most-searched-for Thanksgiving recipes?

It’s possible that people are simply less loyal to desserts and would rather Google a recipe than save one for repeat usage. It seems every family has a stash of hand-written, time-honored recipes for turkey, potatoes, or green bean casserole—are people simply more willing to experiment with dessert recipes?

It’s also possible that dishes like turkey are traditionally left to the host, while guests are expected to bring desserts or side dishes. According to the search trends, people begin planning for “Thanksgiving desserts” up to a month before the actual holiday.

No matter the reason, it’s clear that the large majority of Americans have a soft spot for desserts. So whether you’re digging into a pecan pie or chowing down on pumpkin crunch, feel free to indulge your sweet tooth this Thanksgiving.

Here at Hayneedle, we always try to celebrate food, friends, and family—and Thanksgiving is no exception. The sounds of laughter around the table and the smells of early-morning coffee and late-afternoon leftovers invite feelings of warmth, comfort, and community that feel just like home, no matter where you find yourself celebrating the holiday.

If you’re looking to try your hand at your state’s top Thanksgiving dish (or go off-menu with something a little unexpected), we’d recommend checking out this selection of recipes by Hayneedle partner Ree Drummond of The Pioneer Woman. From stuffing and cranberry sauce to corn pudding and pumpkin meringue pie, you’re bound to find something the whole family will enjoy.